Brad Pitt Gives Moneyball the Spark it Needs to Succeed

Moneyball (based on the book by Michael Lewis) tells the true story of Oakland A’s manager Billy Beane (played by Brad Pitt) and his strategy of managing a team with a limited payroll competing with teams with nine-figure payrolls (New York Yankees, this movie is looking squarely at you).

Set during the 2002 season, the A’s are coming off a first round playoff loss and losing their star players Johnny Damon and Jason Giambi. 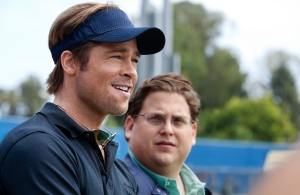 The challenge: rebuild the A’s organization with one of Major League Baseball’s lowest payrolls.

Enter Peter Brand (played by Jonah Hill), a statistically driven, Yale-educated economist. Together, they throw conventional MLB wisdom out the window and base the roster solely on player statistics. Initially, this experiment looks like a disaster. Fans, the Oakland media and even the A’s manager (played by Philip Seymour Hoffman) are incensed after the dismal start to the season.

Slowly, but surely the season turns around for the A’s as the plan starts to pay off culminating with a 20-game win streak. Beane and Brand’s experiment revolutionizes the league after only one season.

Many critics are throwing out the “O” word for Pitt’s performance. While I think that’s a bit premature, it is one of his strongest performances since Fight Club.

Pitt and Hill have great onscreen chemistry, but the true scene stealer throughout the film is Kerris Dorsey who plays Pitt’s character’s daughter. The scenes between Dorsey and Pitt add an emotional connection that is somewhat lacking in the clubhouse scenes.

The movie completely plays to Pitt’s strengths: quick wits, charm and a little bit of snark.

The Oakland A's and the team payroll are at the center of "Moneyball."

The hodgepodge of a team features some nice side characters including Scott Hatteberg (played by Park and Recreation‘s Chris Pratt), David Justice (Stephen Bishop) and Jeremy Giambi (Nick Porrazzo).

While this film is about baseball at its core, it does an excellent job exploring the mind of Billy Beane, his backstory and his love of the game. It’s a most unknown story (save diehard baseball fans) that truly deserves the big screen treatment.

Overall, it is one of the better films I’ve seen this year. It’s been a while since a baseball movie performed well at the box office, but I’m confident Moneyball will be one of the Fall’s highest-grossing films.

All photos courtesy of Columbia Pictures.

Posted by poboylivinrich on September 23, 2011 in Watchin'

← Recipe: Peach Tart with Pecan Crust
Love in the Garden →