Top Chef Betty Fraser and Myself at the 2011 ACS Hope Gala.

I’m a little late in writing a recap of an event I helped coordinate, but better late than never. That said, for the past five years, I’ve had the privilege of serving as a chair for the American Cancer Society Hope Gala. For the first three years, I was the auction chair and for the past two years, I’ve served as restaurant chair.

This year, we raised over $200,000 to help fight cancer in the greater New Orleans area. A large part of the success is due to the Hope Gala committee: Lorrie Lee, Carla Morphy-Adams, Melissa Pennebaker (overall event chair) and Ali James. We had a great team that worked very hard for about six months to put the event together.

This year, for my task of gathering restaurants I thought of the idea to reach out to former Top Chef contestants to participate and come cook at the event. I was fortunate to get four to come down to New Orleans. Betty Fraser (Season 2), Ed Cotton (Season 7), Hosea Rosenberg (Season 5) and Tracey Bloom (Season 7) we all in attendance and made some great dishes.

Top Chefs at the Hope Gala.

In addition to the Top Chefs, great restaurants all participated including Acme Oyster House, Bayona, Creole Creamery, Besh Steakhouse, Le Meritage, Mike’s on the Avenue, La Petite Grocery, Muriel’s, Ste. Marie, La Cote Brasserie and The Grill Room all came out to support a great cause.

Set in the Shops at Canal Place, Fox 8’s Liz Reyes served a the host for the event joined by emcee Mark Romig. During the event ACS honored this year’s Spirit Award recipients — medical professional who made a difference in the lives of those suffering from cancer.

Overall, the night provided some great food (I’m not biased, I promise) and drink, a high-quality auction, great entertainment by the Bucktown All-Stars, and a platform to showcase the progress being made to fight cancer. 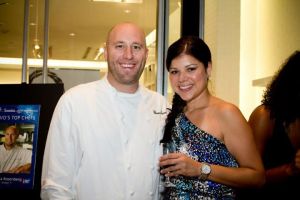 The 2012 Hope Gala is set for August 18, 2012 in The Shops at Canal Place. If you would like to make a donation or participate, feel free to contact me to get involved. We never turn volunteers away and we’re always on the lookout for people compassionate about the fight against cancer. To learn more, visit the American Cancer Society’s website.

Posted by poboylivinrich on September 29, 2011 in Livin'