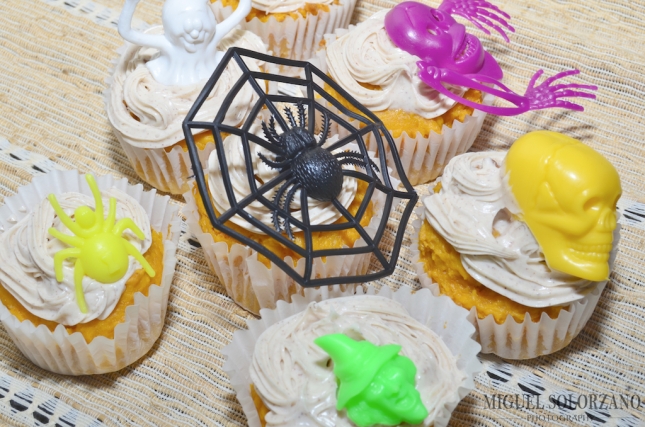 Halloween’s only a couple days away so here’s a quick recipe that uses a total of five ingredients. That’s it — nothing to be spooked about when making these Pumpkin Cupcakes with Maple-Pumpkin Pie Spice Frosting.

You can decorate them with inedible plastic Halloween decorations or use decorations of the edible variety. These cupcakes don’t set as well as cupcakes made with a traditional batter, but these are easier so it’s a trade-off. 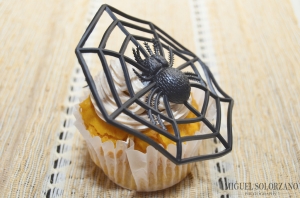 Pumpkin Cupcakes with Maple-Pumpkin Pie Spice Frosting are perfect for Halloween and all of Fall.

You’ll probably have some of the Maple-Pumpkin Pie Spice frosting let so feel free to use if for other dishes. These cupcakes don’t rise that much so try and fill up the cupcake lines about 3/4 way to the top.

These Pumpkin Cupcakes with Maple-Pumpkin Pie Spice Frosting may be light on ingredients, but they’re high on ease and simplicity and taste. They’re perfect to take to a Halloween party when you don’t have time to make something very elaborate. Honestly, no one will ever know how simple they are. Happy Halloween!

Posted by poboylivinrich on October 29, 2012 in Cookin', Desserts, Recipes

This is a pretty rich dessert recipe, but it’s worth every calorie. Since most people are probably following through with New Year’s resolutions right now, you may want to file it away for a special occasion.

I would have never guessed that pumpkin and Kahlua go well together, but luckily they do. You can pretty much use a liquor of your choice for this. I think Bailey’s would make a nice alternative, or maybe even whiskey.

Croissants in the Pumpkin-Kahlua Custard

One of the keys is to let the croissants dry out over night. They will maintain their butteriness, but will absorb more liquid if you do so.

This is a simple recipe that will disappear very quickly. It’s also kid-friendly (despite the Kahlua) since the alcohol cooks out while it’s baking. Of course, you can drizzle with some extra Kahlua to give it an adult kick.

Posted by poboylivinrich on January 2, 2012 in Cookin', Desserts, Recipes

Chili is a great Fall one-pot wonder. This chili recipe boosts the flavor by using pumpkin puree as the base. It’s also loaded with healthy vegetables and lean protein (this recipe uses turkey, but I’ve also used tofu) for a very balanced meal. It’s suited for most diets as the chili itself is gluten-free and dairy-free.

So next time you’re hosting a football watching party or any other Fall event, be sure and add this recipe to your must-try list. 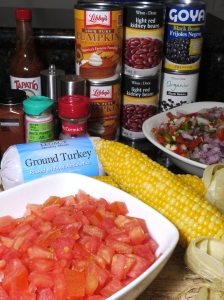 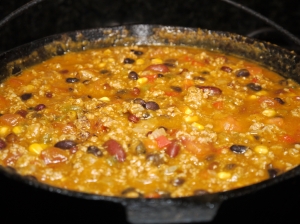 Pumpkin Turkey Chili in the Pot

You can mix and match the suggested garnishes as you see fit. I prefer all of them together. I also serve this chili with a jalapeño cheese cornbread and crumble it over the top. No matter how you dish it out, this is a great chili loaded with nutrients and perfect for a cool Fall day.

Posted by poboylivinrich on October 24, 2011 in Cookin', One-Pot Wonders, Recipes

It’s officially Fall so will someone please tell the weather gods? While we’re waiting for the temperatures to come down to the Fall conditions we know and love, here’s a simple and quick Pumpkin Butter recipe packed with Fall flavors.

Some gourmet stores have jars of pumpkin butter listed for up to $15. With this recipe you can make more than a jar for about 10 bucks. My recipe uses pumpkin puree, but you’re welcome to use a whole pumpkin to make your puree. I don’t have enough hours in the day to do so.

Apologies for the photos, while Pumpkin Butter tastes great, it’s not the easiest thing to photograph. 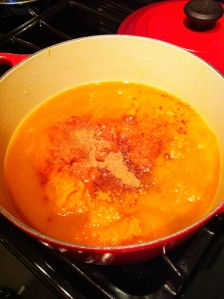 All Ingredients in the Pot 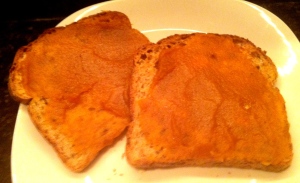 You may think I’m a little heavy handed with my spices, and that may be the case. I really like spices especially when they simmer in liquids infusing the flavor into the final product. So if you think it’s too much for you, adjust accordingly.

This Pumpkin Butter is a great topping for toast, yogurt, bananas, even chicken or fish. You can also use it in place of oil or butter for baked goods (similar to applesauce’s use). My personal favorite is to make a PBx2 — Peanut Butter and Pumpkin Butter sandwich.

I’m sure there are many more uses I haven’t thought of yet. All I know is that this Pumpkin Butter is truly a versatile sauce that will spice up your Fall.

Posted by poboylivinrich on October 12, 2011 in Cookin'

I’m a fiend for cupcakes so while in Boston I sought out two of the best shops: Cakeology and Sweet. Both are in the same vicinity in downtown.

Cakeology operates in a single location on Province Street while Sweet has four locations throughout Boston. During my visit, I went to Sweet’s Downtown location on School Street. Cakeology’s shop has a nice interior seating area and it’s fun to watch the bakers out in the open. Sweet’s location is more boutique and feels like a more refined experience.

But I’m not reviewing the interiors, let’s get down to the cupcakes! 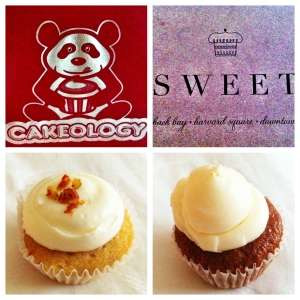 Cakeology’s Carrot Cupcake was moist, but a little loose and I didn’t taste many carrot cake elements that I’m used to. I was hoping for more texture inside with shredded carrot, coconut or walnuts, but it wasn’t there. The frosting, however, was great. It was very light and fluffy and had the perfect cream cheese finish.

Sweet’s Organic Karat Cupcake was a little on the dense side, but it was packed with more carrot cake elements. The diced pineapple really sent it over the top. However, I found Sweet’s frosting on this cupcake a little grittier than I would have liked.

Overall, I have to give this one to Sweet. The carrot cake elements were there and the pineapple was a pleasant surprise and gave the cupcake more texture. That said, if I could put Cakeology’s frosting on the Sweet cupcake, I would have had close to the perfect carrot cake cupcake.

First up, Cakeology. I didn’t get a lot of pumpkin from this cupcake. I know pumpkin is a subtle flavor, but this cupcake was lacking for me. The frosting was also a little loose. I did like the decorative pumpkin candy on top to give it a pop of color. But, I wouldn’t recommend this cupcake.

Unfortunately, Sweet’s Pumpkin Pie Cupcake wasn’t any better. Once again, I didn’t get much pumpkin, but I did pick up on the nutmeg and cinnamon aspects. The frosting was creamy and tasty, but it really overpowered the cupcake itself especially the subtlety of the pumpkin.

I wish I could, but I can’t recommend either of these cupcakes which is a disappointment because it’s Fall and everyone could use more pumpkin in their life. There’s definitely room for improvement for both shops on their pumpkin offerings. 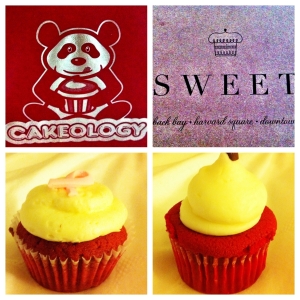 Red Velvet — the golden standard of cupcakes. I’ve always been baffled by how the red coloring seems to add unexpected flavor to a light cocoa cupcake. It’s got to be purely psychological.

Cakeology’s Red Velvet Cupcake was delicious. The cupcake itself was moist with a definite hint of cocoa. The frosting was creamy with just enough cream cheese flavor. Put those two together and you’ll see that Cakeology has a damn good red velvet cupcake.

Sweet’s Red Velvet Cupcake was a letdown. The cake was too dry (I tasted all of these cupcakes the day I bought them) and stuck to the roof of my mouth. Tastewise, it didn’t have the hint of cocoa I was hoping for. Aside from the cupcake, the frosting was gritty (much like the carrot cupcake) and there was too much of it in relation to the cupcake. I like frosting, but it needs to be used in proportion to the cupcake. Otherwise, the frosting can overpower the cupcake — that’s what happened here.

Overall, these are two delicious cupcake places in Boston. Each with its own specialties and approaches to the cupcake world. After tasting both shops’ cupcakes, it’s a tough choice. I can’t really tell you to pick one over the other, but I can recommend Sweet for its Organic Karat Cupcake and Cakeology for its Red Velvet Cupcake. I wish I had more time to evaluate all of the offerings these shops have. Guess I’ll have to head back to both next time I’m in Boston.

Posted by poboylivinrich on October 11, 2011 in Eatin'