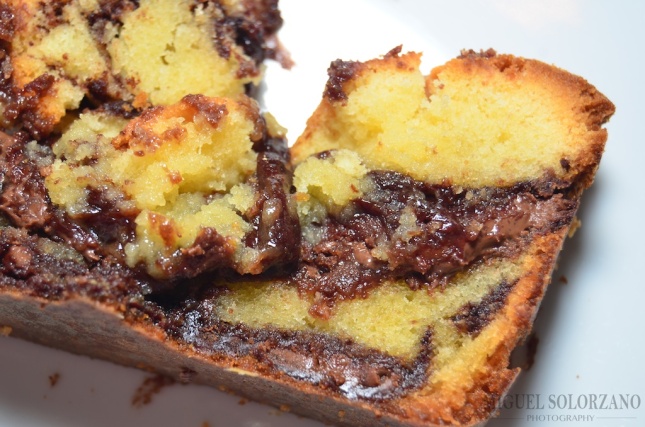 Love Nutella? Welcome to the club! Not a fan of Nutella? I’m not even sure what to say to you and this recipe isn’t for you.

If you are part of the club, you’ll love this recipe for Nutella Swirl Pound Cake. Talk about delicious, rich and decadent.

Letting the Nutella Swirl Pound Cake cool for those two long, grueling hours while you salivate and smell the deliciousness is going to be the hardest part.

This is one of the best pound cakes I’ve ever had. I had two servings on the spot. You don’t need to garnish it with anything. It’s good enough to devour all on its own.

Posted by poboylivinrich on May 17, 2017 in Cookin', Desserts, Recipes

With winter upon us, it’s time for citrus to take center stage as things like oranges, lemons and limes come into season. I was able to pick up some Meyer Lemons from Hollygrove Market and Farm in last weekend’s box.

Dust the Meyer Lemon Squares with powdered sugar before serving.

So what did I do with them? I turned them into delicious Meyer Lemon Squares.

These Meyer Lemon Squares are great for the holidays.

These Meyer Lemon Squares should bake to a nice, pillowy consistency. The great thing about using Meyer lemons is that they don’t end up too sour. You can use additional lemon peel in the mixture if you want them more sour.

Give these Meyer Lemon Squares a try at your next holiday function. They definitely deserve a place next to the pecan pie and the pumpkin pie.

Posted by poboylivinrich on January 18, 2017 in Desserts, Recipes

I was nervous when I made this Pineapple-Coconut Upside-Down Cake. Why? Admittedly, I’m not the best baker although I’m getting a lot better. Also, I was cooking this as a birthday cake for my mom so no pressure or anything.

Turns out my worrying was unwarranted. This cake is moist, delicious and full of tropical flavor. I made it while I was on vacation so I didn’t have access to my iron skillet, but I’m sure using it would have taken it to another level. That said, the level this cake is on is already pretty high. 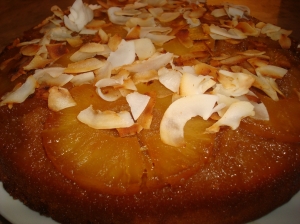 The topping for Coconut-Pineapple Upside-Down Cake

I made this Pineapple-Coconut Upside-Down Cake while I was on vacation at the beach and it really fit the bill for a beach birthday.

If you’re a fan of coconut and/or pineapple this is the cake for you. I also envision this recipe making some great cupcakes if you place a single pineapple ring in each cupcake slot.

Posted by poboylivinrich on September 19, 2012 in Cookin', Desserts, Recipes 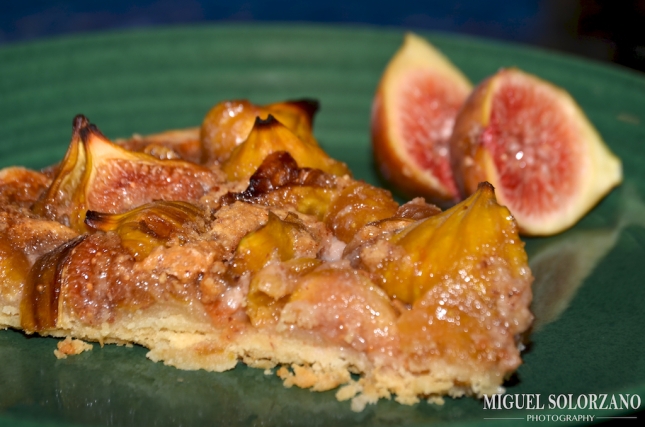 This Fig Tart is pretty damn close to perfection. It’s not too sweet and has a nice balance of flavors.

The key to this tart is two-fold. 1) Getting your hands on great figs. 2) Getting the frangipane right. If you don’t know what frangipane is, you’re in for a treat. It’s basically a pureed mixture of butter, toasted almonds, sugar and egg.

For the Fig Tart: 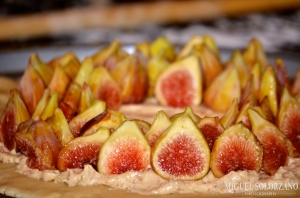 Figs in the Frangipane

Figs are very fragile, but they are worth working with when making this Fig Tart. It comes out flaky and will literally melt in your mouth.

Feel free to serve it a la mode, but it stands alone very well. You’ll forget all about Fig Newtons once you’ve had a piece of this Fig Tart.

Posted by poboylivinrich on July 25, 2012 in Cookin', Desserts, Recipes

Is there a better fruit combo than strawberry and banana? I’m not sure there is after making and eating this Strawberry-Banana Bread.

The fresh Louisiana strawberries certainly didn’t hurt. This is a bread that will disappear very quickly. It’s perfect for breakfast, brunch or a mid-day snack.

You can also freeze the loaves for later use like when strawberries aren’t in season.

This Strawberry-Banana bread is a great Spring treat. It’s one of the easiest bread recipes imaginable.

Posted by poboylivinrich on April 17, 2012 in Breakfast, Brunch, Cookin', Recipes

What Santa Really Wants for Christmas

Mint and chocolate make an awesome team. Probably only second to chocolate and peanut butter in my book. These Mint Chocolate Chip Cookies are made with whole wheat flour. Trust me when I tell you, you won’t miss the white flour.

The green mint chips pack a lot of minty flavor, but it’s balanced out well by the semisweet chocolate morsels. I happened to find the mint chips at World Market by accident, but I’m sure chopped Andes Mints will work just fine.

You can make the batter in advance and store in the refrigerator for up to two days before baking. Just make sure to wrap it in parchment paper so it doesn’t dry out.

Even though I’m not a big chocolate fan, these cookies are great for the holidays and the green in the mint chips give them a nice pop of color. If mint’s not your thing, you can substitute any flavor of chip you can get your hands on. I’m thinking peanut butter chips would go well with this batter.

Posted by poboylivinrich on December 19, 2011 in Cookin', Desserts, Recipes

Biscuits from scratch can seem like a fairly daunting task. But don’t worry, this Bacon Cheddar Biscuit recipe is simple and you can go from step 1 to a finished batch in 45 minutes (cooking time included).

Rather than making plain biscuits, I added some bacon and cheddar to make this extra tasty. Feel free to add more cheese or more bacon if you so desire.

These biscuits go great with most meals. They’re especially an awesome way to make a breakfast biscuit sandwich.

No matter how you consume them, you can store them in a sealed container for several days. If you have any left over, that is.

Posted by poboylivinrich on December 14, 2011 in Cookin', Recipes, Sides

I’m a fiend for cupcakes so while in Boston I sought out two of the best shops: Cakeology and Sweet. Both are in the same vicinity in downtown.

Cakeology operates in a single location on Province Street while Sweet has four locations throughout Boston. During my visit, I went to Sweet’s Downtown location on School Street. Cakeology’s shop has a nice interior seating area and it’s fun to watch the bakers out in the open. Sweet’s location is more boutique and feels like a more refined experience.

But I’m not reviewing the interiors, let’s get down to the cupcakes!

Cakeology’s Carrot Cupcake was moist, but a little loose and I didn’t taste many carrot cake elements that I’m used to. I was hoping for more texture inside with shredded carrot, coconut or walnuts, but it wasn’t there. The frosting, however, was great. It was very light and fluffy and had the perfect cream cheese finish.

Sweet’s Organic Karat Cupcake was a little on the dense side, but it was packed with more carrot cake elements. The diced pineapple really sent it over the top. However, I found Sweet’s frosting on this cupcake a little grittier than I would have liked.

Overall, I have to give this one to Sweet. The carrot cake elements were there and the pineapple was a pleasant surprise and gave the cupcake more texture. That said, if I could put Cakeology’s frosting on the Sweet cupcake, I would have had close to the perfect carrot cake cupcake. 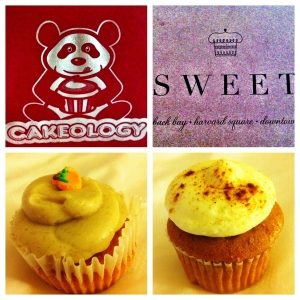 First up, Cakeology. I didn’t get a lot of pumpkin from this cupcake. I know pumpkin is a subtle flavor, but this cupcake was lacking for me. The frosting was also a little loose. I did like the decorative pumpkin candy on top to give it a pop of color. But, I wouldn’t recommend this cupcake.

Unfortunately, Sweet’s Pumpkin Pie Cupcake wasn’t any better. Once again, I didn’t get much pumpkin, but I did pick up on the nutmeg and cinnamon aspects. The frosting was creamy and tasty, but it really overpowered the cupcake itself especially the subtlety of the pumpkin.

I wish I could, but I can’t recommend either of these cupcakes which is a disappointment because it’s Fall and everyone could use more pumpkin in their life. There’s definitely room for improvement for both shops on their pumpkin offerings.

Red Velvet — the golden standard of cupcakes. I’ve always been baffled by how the red coloring seems to add unexpected flavor to a light cocoa cupcake. It’s got to be purely psychological.

Cakeology’s Red Velvet Cupcake was delicious. The cupcake itself was moist with a definite hint of cocoa. The frosting was creamy with just enough cream cheese flavor. Put those two together and you’ll see that Cakeology has a damn good red velvet cupcake.

Sweet’s Red Velvet Cupcake was a letdown. The cake was too dry (I tasted all of these cupcakes the day I bought them) and stuck to the roof of my mouth. Tastewise, it didn’t have the hint of cocoa I was hoping for. Aside from the cupcake, the frosting was gritty (much like the carrot cupcake) and there was too much of it in relation to the cupcake. I like frosting, but it needs to be used in proportion to the cupcake. Otherwise, the frosting can overpower the cupcake — that’s what happened here.

Overall, these are two delicious cupcake places in Boston. Each with its own specialties and approaches to the cupcake world. After tasting both shops’ cupcakes, it’s a tough choice. I can’t really tell you to pick one over the other, but I can recommend Sweet for its Organic Karat Cupcake and Cakeology for its Red Velvet Cupcake. I wish I had more time to evaluate all of the offerings these shops have. Guess I’ll have to head back to both next time I’m in Boston.

Posted by poboylivinrich on October 11, 2011 in Eatin'