Pardon my French, but I can sum up o ya in two words: Holy Shit!

I’ve always enjoyed a good meal and Asian happens to be a favorite cuisine of mine and o ya just took my appreciation to an entirely new level. I’m not sure I’ll be able to eat Asian for months…maybe year. That’s how out of this world my experience at o ya was. The dishes are beyond inventive, handled with a precision most engineers would envy and bursting with flavors most restaurants can’t match in years, yet along a single night.

The menu is a little overwhelming, but I firmly believe you can’t make a wrong decision. I won’t pretend to remember the order of the items we ate so I’ll take them one by one.

First, I’ll cover the salmon dishes we had. The Scottish Salmon Belly with cilantro, ginger and hot sesame oil drizzle was the perfect blend of the fattiness you expect from tuna, but it was bolstered by the fresh cilantro and ginger and given just the right amount of kick from the hot sesame oil. The Scottish Salmon with spicy sesame ponzu, yuzu kosho and scallion oil was another fine piece of fish might all the more richer from the elements working harmoniously together.

The Hamachi at o ya is fantastic. We had the Hamachi with spicy banana pepper mousse which is as delicious as it sounds. The mousse does just enough to heighten the fishiness of the Hamachi while letting the fish carry most of the weight in the dish. We also had the Hamachi with viet mignonett, thai basil and shallot. This Hamachi has a much higher Asian-tasting profile. The third Hamachi was the Kanpachi Baby Hamachi with Jalapeno Sauce, Sesame, Apple and Myoga. Not only was it a picturesque dish, it was equally delicious and had just the right balance of heat and coolness. If you asked me to pick between the three, I would have a very difficult time, but I might lean slightly toward the Kanpachi Baby Hamachi.

A highlight of the night was the Shiso Tempura with Grilled Lobster featuring charred tomato and ponzu aioli. It just so happened that we saw this dish being prepared while we were being seated and knew we had to order it immediately. I should point out that I don’t like tomatoes. That said, the charred effect of the tomato blended perfectly with the fried shiso leaf and fresh lobster. I would have no problem ordering this multiple times and scarfing it down just as quickly as I did on my first try. 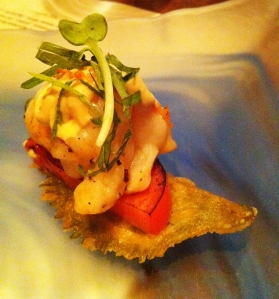 Another one of my favorites (though calling a dish at o ya a favorite is kind of pointless since they are all phenomenal) was the Fried Kumamoto Oyster with yuzu kosho aioli and squid ink bubbles. The fried oyster was so light and mixed really well with the saltiness/brine of the squid ink bubbles. Served as a sort of deconstructed sushi (with seaweed-wrapped rice), this “sushi” was one of the best rolls I’ve ever had. I could have eaten a dozen.

Taking a break from seafood, we ordered the Chopped Tea Brined Chicken Thighs with cucumber, avocado, carrot and ponzu vinaigrette. Honestly, this kind of reminded me of a vermicelli bowl minus the noodles. The chicken thighs were brined to perfection and the coolness of the cucumber and carrot mixed with the creaminess of the avocado pushed this dish over the top. Out of all the dishes I had, this is the dish I would feel the most comfortable recreating. I could only hope to do it half the justice the chefs at o ya did.

One of the lightest dishes of the night was the Grilled Chanterell and Shiitake Mushroom Sashimi with rosemary garlic oil, sesame froth and soy. Honestly, this dish got a little lost in the midst of all the exceptional dishes we had. While there wasn’t a single thing wrong with it, it just didn’t leave the same impression the other dishes throughout the night left. 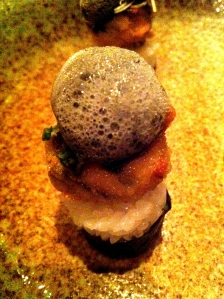 Another non-seafood dish was the Tamago Omelette “Roll” with dashi sauce, burgundy truffle, robiola cheese and chives. If this is o ya’s idea of an omelette, I’m coming back for breakfast. The egg was so airy and light it literally melted in my mouth. Add in the other elements and you have a egg “roll” that surpasses anything I’ve ever had with egg in it.

Back to seafood, the Shrimp Tempura with bacon truffle emulsion and scallion ginger oil was another standout. While it was a tad bit salty, the bacon truffle emulsion was the star of the dish. It complemented the whole shrimp nicely. The shrimp itself was the perfect amount of crunch. The shell and meat were cooked so well that the shell was like a crispy chip.

Two more outstanding seafood dishes were the Suzuki Sea Bass and the Shima Aji and Santa Barbara Sea Urchin. The Suzuki Sea Bass was served with spicy cucumber vinaigrette, avocado and cilantro. The richness of the sea bass partnered perfectly with the other elements to create a fatty/crunchy combo. The Shima Aji and Santa Barbar Sea Urchin was out of this world. Served with a ceviche vinaigrette and cilantro, the fattiness of the urchin was like a nice gelee pairing with the cilantro to create a blissful piece of sashimi. 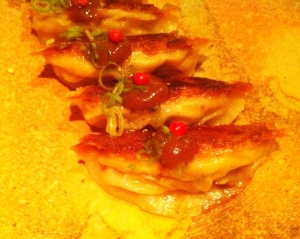 I’ve purposely been saving the foie gras dishes until near the end. What o ya does with foie gras should be illegal (and no, not from the PETA standpoint). Example number one is the Foie Gras Gyoza with kyoto sansho and pink peppercorns. These are hands down the best dumplings I’ve had in my entire life. No joke. I could have eaten three orders myself. As a suggestion from the waiter, we ordered Foie Gras with balsamic chocolate kabayaki, claudio carallo raisin cocoa pulp and sip of aged sake as our last course before dessert. Foie gras and chocolate?!? Let me tell you, it works in perfect harmony. It’s rich, it’s chocolately, it’s creamy. If a chocolatier caught wind of this idea, they would be smart to capitalize on it immediately.

We ordered all four of the available desserts: Tres Leches Boston Creme Pie, Affumagato with Coconut and Espresso, Chocolate Gelato with Salted Caramel, and Soy Milk Blanc Mange. I was a little underwhelming by the desserts. The Affumagato was overpowered by the espresso so the coconut was lost while the Soy Milk Blanc Mange tasted like a Thai tea custard. Not bad, just not great. The Tres Leches Boston Creme Pie and Chocolate Gelato with Salted Caramel were both good, but these desserts don’t live up to the expectations set by the food.

I highly recommend ordering sake to accompany all the aforementioned dishes. O ya has a great sake selection that runs the gamut from small breweries to larger breweries. Each sake we ordered had a different flavor complex, but all worked well with the food.

If you come to Boston, eat at o ya. It’s that simple. While it may spoil you and how you taste Japanese food, it’s a dining experience you won’t soon forget. It was heaven in Boston. I woke up thinking it was a dream. Thankfully, it wasn’t.

O ya is located at 9 East Street. The hours vary so visit o ya’s website for full details.

Posted by poboylivinrich on October 2, 2011 in Eatin'

One response to “Review: o ya (Boston)”