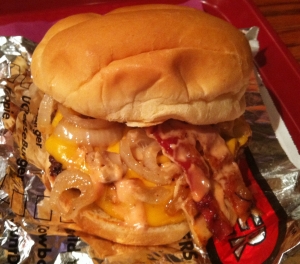 Burgers don’t seem to be a big thing in Boston, but I wanted to check the scene out anyway. After doing some research, I decided to go to local joint UBurger. Turns out I missed their fifth anniversary by a day.

Technically a chain (they have three locations – Park Street, Kenmore Square and BU West Campus), UBurger serves a variety of burgers (either pre-made or build-your-own). I ventured to the Kenmore Square location which was full of students.

Since I had already perused the menu online, I had an idea of what I was going to order. The menu is pretty extensive, but I had my mind set on a Grand Slam Burger (with bacon, cheddar cheese grilled onions, mushrooms and house sauce) and an order of onion rings. I probably should have ordered a frappe as well, but knew I was going to get dessert elsewhere so I resisted.

My order came out pretty quickly and dove in to the onion rings. Very crispy and thinner than most onion rings I’m used to, they packed quite a crunch. They were lacking a little seasoning, but overall, UBurger has some solid onion rings. The crispness held up even after they had been sitting for a while which is always a good test.

The burger itself was cook medium (I prefer my burgers mid-rare to medium) which was a nice change-up from most quick service burger joints that overcook the meat. The patty was seasoned really well and was really a star on a bun. The house sauce was very good, but with the way it blended with the grilled onions and mushrooms, I couldn’t quite pick up on the flavors in the sauce. The bun was a great aspect. It wasn’t too heavy or light and had a nice doughiness to it. All of the elements on this burger really worked well together so I was more than happy with my choice.

All in all, UBurger was a pleasant experience. The burger and onion rings were both solid items and I can see why the place is so popular with the local students: it’s quick and it’s cheap. My burger, onion rings and drink rang in at $10.33. Not bad for a such a solid meal.

UBurger has three location throughout Boston. Visit the UBurger website for locations and hours.

Posted by poboylivinrich on October 5, 2011 in Eatin'