I think I visited Cowbell for the first time early in 2011. From the first bite, I knew it would be a place I frequented often. So it came as no surprise to me when Cowbell was named The Gambit’s Best New Restaurant (as selected by readers). 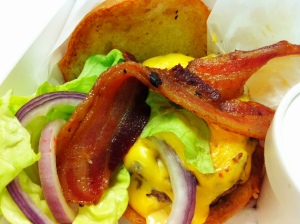 The burger craze is in full swing in New Orleans, but out of all the burger joints (old and new), Cowbell is hands down my favorite. The beef is always juicy and cooked perfectly. Add American cheese, bacon, a yard egg and Cowbell’s homemade Mojo sauce and you’ll be transported to burger heaven. The burger with zinfandel, bacon and onion compote can take you there as well — it’s just a different journey.

The Cowbell burger is so good, it makes it hard for me to order anything else off of the menu. Fortunately, I break the habit and order other items from time to time. One of the best I had was a salmon special with black beans and avocado. The waitress (who knows me well by now) recommended and was spot on (as usual). Her name’s Tarani, you should ask for her if/when you go in though she seems to be behind the bar most of the time these days.

Additionally, you can’t go wrong with any of Cowbell’s grilled cheese sandwiches that seem to change daily. The Fried Oyster Salad is also delicious when oysters are in season. The Fish Tacos are good, not great, but will do the trick. 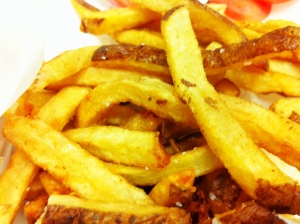 But admit it, what you really want is the burger. I know, I’m the same way. A lot of my love for the Cowbell burger comes from the meat itself, but the potato bun should be given some of the credit. And if you think I’m crazy for getting the egg, try it yourself, you won’t be disappointed. The yolk from the egg will burst and soak into the potato bun given the burger a whole new flavor profile.

You can even sop up the yolk overflow with the hand-cut fries that are always crisped and seasoned just right. Or you can always substitute (for an extra charge) Cowbell’s kickass Mac and Cheese in place of the fries. Their Mac and Cheese is made with white cheddar and roasted poblano peppers. It’s creamy, has a subtle kick and is filling.

Another thing you won’t want to leave without is the Fresh Made Apple Pie. It’s baked individually into a puff pastry, but it’s worth every bite and for $5 it’s a steal. 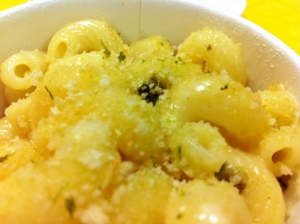 Cowbell used to by BYOB, but now that they have a liquor license it’s $5 for the first bottle you bring and $10 for each after that. Most of the drinks they have are of a nice portion and they have one of the best margaritas in town, surprisingly enough.

Cowbell is 100% deserving of winning Gambit’s Best New Restaurant. You may experience a little bit of a wait now that it’s on people’s radar. Service is normally great (like I said, ask for Tarani), but there’s one lady who I would avoid. You’ll know her if you get her. Simply put, she’s just not friendly. Thankfully, the food more than makes up for it. And Brack May, the owner, couldn’t be a nicer guy. Invite him over to your table if he’s around.

Posted by poboylivinrich on November 17, 2011 in Eatin'