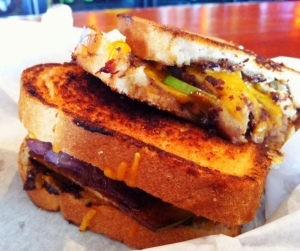 Located at The Rendon Inn, J’anita’s has some of (if not the) best bar food in New Orleans — and bar food is an art, in my opinion. It can’t be too greasy or too filling to measure up.

J’anita’s uses great ingredients to make sandwiches, soups and sides worthy of five-star status. They also have daily specials that are worthy of cult status.

Probably the best special is the Meatloaf Sammich. I can honestly say it’s the best meatloaf and best meatloaf sandwich I’ve ever had. A slab of housemade meatloaf, mozzarella cheese, green pepper and red onions is served on ciabatta bread from Stein’s Deli. Just so you know, it’s the Tuesday special so plan ahead accordingly.

The regular menu offers several standouts. On my first visit I had the Best Fish Sammich Ever!. They’re name for it, not my opinion, but it’s pretty accurate. It’s ciabatta bread with a redfish filet, bacon, grilled onion, feta, lettuce and tomato. Using redfish definitely sends this fish sandwich to another level.

My favorite item overall is the St. Chuck Duck. Holy duck! The St. Chuck Duck is a grilled sourdough with currant tapenade, blue cheese, cheddar cheese, grilled onion, green apples and cabernet-sauteed duck. Did you get all that? It’s a lot, but everything works so well together. This has to be one of the best sandwiches in the city.

Another item worth mentioning is the Not Quite Cuban. It’s pulled pork, bacon, Swiss cheese, pickles and chimichurri sauce on a pressed ciabatta. The pork was smoky and delicious and worked well with all the other not-so-Cuban ingredients.

I would also recommend the Adult Grilled Cheese. It’s loaded with cheddar, pepper jack, feta cheese, bacon, grilled onion and tomato — though I never allow tomatoes on my sandwiches. It’s ooey gooey and bacony and delicious all pressed between two slices of sourdough. 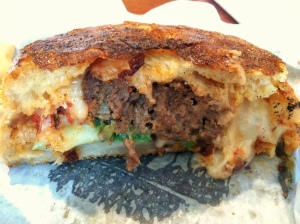 I do have a complaint about J’Anita’s. Every single time I go, they are out of guacamole. I’m dying to finally try it. One day…

As for the sides, I’ve yet to have one that wasn’t phenomenal. The Tater Salad and Cheese Grits are tied for my favorites. The fries are steak-cut fries which I’ve never been a fan of so I usually don’t go for those. The Cole Slaw is also delicious and not overloaded with mayo. You really can’t go wrong with any of the sides.

The folks at J’Anita’s know what they’re doing when it comes to food. It doesn’t surprise me at all that they recently opened a second location inside Grit’s Bar. While I’ve yet to try that one, the Janita’s at the Rendon Inn has yet to disappoint me. In fact, it’s always exceeded my expectations. Do yourself a favor and venture off the beaten path to try J’Anita’s.

J’Anita’s is located in The Rendon Inn at 4501 Eve Street in the Broadmoor neighborhood. It’s a bar so the hours run pretty late.

Posted by poboylivinrich on November 22, 2011 in Eatin'