It’s the match-up that doesn’t matter (just don’t tell these Tigers): LSU vs. UGA. Well, I guess technically, it matters for the record books, but is anyone really under the impression LSU’s ticket to the BCS Championship isn’t already punched?

Other teams get to take a week off (Alabama) before heading into the bowl season, but LSU will look to make it win number 13. And for the record, I think the extra game helps LSU and couch surfing hurts Alabama.

Anyway, I’m getting ahead of things, back to the game at hand. UGA comes in on a 10-game win streak after dropping it’s first two. LSU comes in on a 13-game winning streak dating back to last year’s Cotton Bowl.

LSU’s passing game is built on efficiency rather than big plays. The Tiger rushing game is what pounds opponents into submission. I just don’t see this changing against UGA — no matter how stout the stats say the Bulldog run defense is.

The LSU special teams will also play a factor as they have all season. LSU is allowing a ridiculously low 0.46 yards per punt return — less than a foot and a half! If there’s a record for fewest punt return yards allowed for the season, this has to be it. 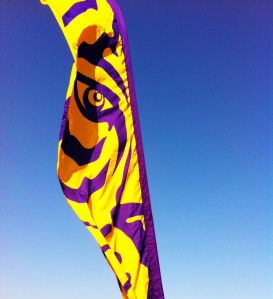 Eye of the Tiger

Another huge factor pointing to an LSU victory is experience. LSU has more big-stage experience at this point and knows how to not only play on the big stage, but to excel on it. Despite the game taking place in Georgia, I know the Tiger faithful will travel well and override the Georgia supporters in the Georgia Dome.

LSU has seized it’s BCS destiny this year and it seems the whole team is aware of the stakes of every game. Thirteen and Eaux is about to become a reality in Atlanta. Forget Christmas and New Year’s, Jan. 9 is the most important date circled on Tiger players and Tiger fans calendar. Start the countdown to a Tiger Takeover in New Orleans!

Here’s some pregame entertainment for you: Protectors of the SEC.

Posted by poboylivinrich on December 2, 2011 in Livin', Uncategorized