Every year, we gather a group of friends together to embark on what we call “Lobby Hopping.” This year was the fourth annual Lobby Hopping (though I’ve only been involved in three). The basic premise is that the group goes from hotel lobby to hotel lobby to view the decorations and to imbibe in the spirits at the hotel bars.

This year’s route started at the Hotel Roosevelt in the Sazerac Bar. The Roosevelt’s lobby is always one of my favorites. They really go all out to create a beautiful, yet restrained, display. The Sazerac Bar is also one of the city’s most refined bars. I love that it’s like stepping back in time. After stopping for cocktails at The Sazerac Bar and taking pictures of the Roosevelt lobby, we headed off to the Ritz-Carlton.

The Ritz-Carlton’s lobby decorations have kind of tapered off over the last couple of years. While they still have nice decorations, I for one, miss the edible gingerbread display and all the candy and sweets that came along with it. Now, they opt for a simple lobby display and a large tree in the lobby courtyard.

The Davenport Lounge at the Ritz-Carlton was a fun place to get a drink. It just so happened that Jeremy Davenport was playing a show that night so we had the perfect entertainment to go with the cocktails. Additionally, this stop has my favorite drink: the Blackberry Caipiroska. From the Davenport Lounge, we headed to the Hotel Monteleone. 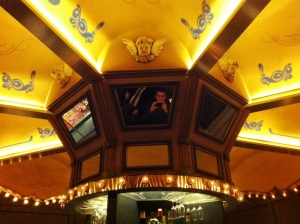 The Carousel Bar at The Hotel Monteleone

Though the Monteleone’s hotel decorations pale in comparison to the other stops, the hotel’s bar, The Carousel Bar, is probably the coolest hotel bar in the city. We were lucky enough to grab some seats at the Carousel Bar and had enough drinks to last two revolutions. And yes, one revolution is exactly 15 minutes — we timed it.

We had plans to continue on to the Royal Sonesta and Irvin Mayfield’s Playhouse, but because we took our time imbibing at the rest of the hotels, we ran out of time. It seems our route and plans change each year, but the event is always a blast no matter where we stop.

I highly encourage you to form your own Lobby Hopping group or join us next year if you happen to be around. Happy Holidays!

Posted by poboylivinrich on December 11, 2011 in Livin'