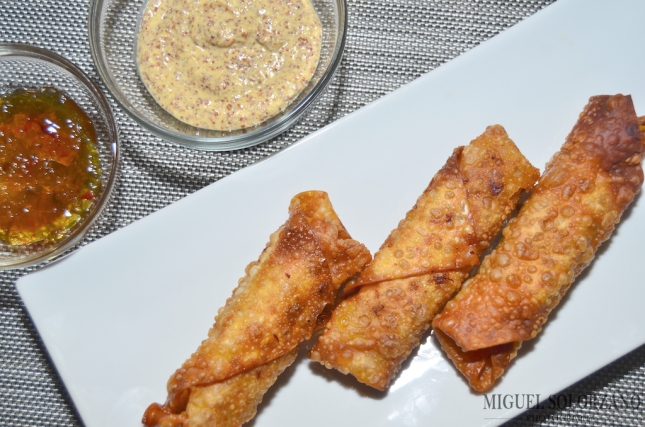 One of my favorite things about cooking is the opportunity to fuse ethnic dishes. In this case, it’s the Chinese egg roll and Cajun boudin into Boudin Egg Rolls. I call it Casian cuisine. And man, are they good.

I used boudin straight from Lafayette, but the store-bought kind will probably work as well. In my opinion, the smokier you can find, the better.

These Boudin Egg Rolls were surprisingly simple to make. There’s not much assembly required once you get the hang of rolling the egg rolls.

I will definitely be adding these Boudin Egg Rolls to my tailgating cuisine repertoire. They are perfect to grab, dip and go. They may just be one of my new favorite appetizers.

Posted by poboylivinrich on April 19, 2017 in Appetizers, Cookin', Recipes 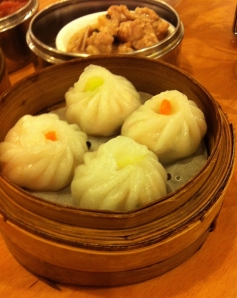 After a few nights of eating at some of Boston’s top restaurants, I decided to head over to China and cure a craving I’ve had for dim sum. Unfortunately, it’s a craving I can’t satisfy in New Orleans. I chose Winsor Dim Sum and it proved to be a pretty good choice.

Every piece of dim sum was a ridiculously low $3.15. I decided to go for six dishes in total. I went for a blend of some items I was familiar with and few I wasn’t as familiar with.

First up were the shrimp rolls. They were tasty, but the wrapper was a bit soggy/heavy for my liking. I also didn’t like that the shrimp weren’t deveined. I don’t like gritty shrimp.

Next came the crab/shrimp dumplings. This was my second favorite dish of the night. They came out steaming hot and were flavorful and full of crab and shrimp. The wrapped itself was then and only served to complement the filling — the way a good dumpling should.

I tried the pork and peanut dumplings next. While they weren’t as good as the crab/shrimp dumplings, they were still pretty good. The peanut and turnip gave the dumplings a nice crunch.

I went out on a limb and tried the chicken feet. As this was my first time to try the dish, I wasn’t too sure what to expect. After trying them, I can’t say I’m up for trying them again. The skin was soggy and it was overseasoned with anise. I also couldn’t get much meat off the feet. I’m sure diners more familiar with the dish were wondering just what the hell I was doing.

I also tried the spare ribs. They weren’t exactly what I was expecting. I was hoping for full on ribs, but got cut of pieces that required chewing the meat off of the cartilage. I was able to get past that and really enjoy the flavor.

My favorite dish of the night was the shrimp-stuffed fried tofu. I wasn’t sure what to expect with the mixture of tofu and seafood, but these things were delicious. I could have easily eaten a few plates of them. They were seasoned and fried perfectly.

So if you’re ever in Boston and craving dim sum. I recommend Winsor Dim Sum, just don’t travel too far off the beaten path. Winsor Dim Sum is located at 10 Tyler Street in Boston’s Chinatown.

Winsor Dim Sum is located just inside Boston’s Chinatown at 10 Tyler Street. The restaurant is open seven days a week from 9 a.m. to 10 p.m.

Posted by poboylivinrich on October 4, 2011 in Eatin'