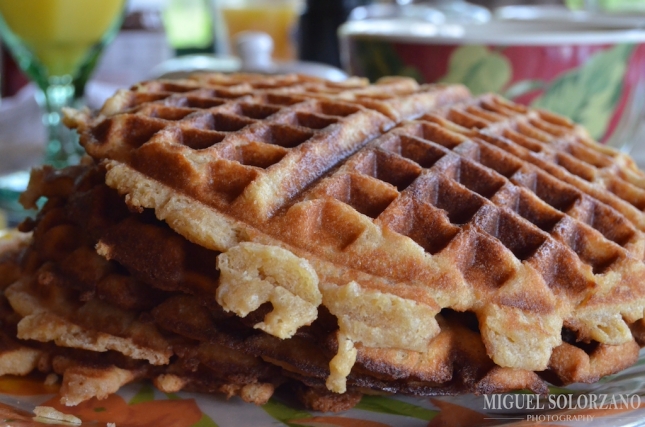 I don’t know many people who don’t like waffles. But if you’re making your waffles from pancake batter, you’re missing out.

Liège Waffles use yeast in the batter as well as pearl sugar to give them a nice texture. This waffles are crisp, yeasty, fluffy and crunchy.

These waffles do take some time in the preparation department, but they’re worth it. They’ll wow breakfast guests.

Pearl sugar may be difficult to find in your local grocery store so I recommend heading over to Amazon.com. If you don’t want to buy pear sugar, you can coarsely chop up some sugar cubes as a substitute.

Posted by poboylivinrich on April 11, 2012 in Breakfast, Cookin', Recipes 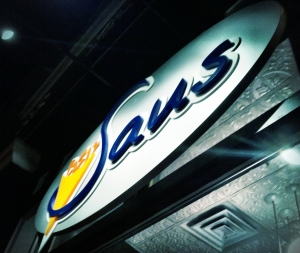 Waffles. Fries. Two things pretty much irresistible to a food. So when I heard of Saus, a place in Boston specializing in both, I had to visit. Saus is located just steps from Quincy Market so it should benefit from a lot of foot traffic. When my friend and I went it was empty so we had plenty of time to peruse the menu and decide what we wanted.

We ordered a regular-sized order of fries to split. In addition to the fries, Saus offers roughly 15 to 20 dipping sauces. We decided to try four: Bacon Parm (bacon and parmesan), Samurai Sauce (Sriracha mayo), Truffle Ketchup and Vampire Slayer (roasted garlic mayo). All of the fries and waffles are made to order, so once we placed our order, the potatoes went into the fryer. They came out hot, golden and crispy. 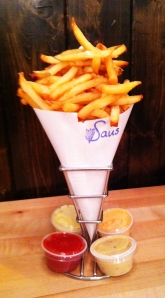 The Fries and Sauces

Were they the best fries I’ve ever had? Probably not, but they were still worth ordering. What really made the difference is the sauces. It’s clear to me that the brains behind Saus took the time to test sauces in deciding what would pair with fries. My two favorite sauces of the night were the Samurai and the Bacon Parm, but they were all good.

After most of our fries were out of the way, our waffles came out piping hot. Saus offers four different waffle toppings (Salted Caramel, Homemade Nutella, Lemon Cream and Berry Berry) and a seasonal topping (when I visited it was Harvest Apple). Since we ordered two waffles, we chose Salted Caramel and the Homemade Nutella. What makes Saus’ waffles insanely delicious is the fact that they use pearl sugar. It really gives the waffles a nice crunch that doesn’t just come from the golden brown waffle itself.

The Homemade Nutella waffle was quite tasty, but Saus’ Nutella has nothing on the real thing. It doesn’t have quite the same chocolate/hazelnut ratio or the consistency of Nutella. 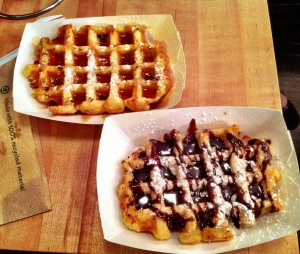 I will say that the Salted Caramel waffle is one of the best waffles I’ve ever had (sorry, Waffle House Pecan Waffle). The sweet/salty flavor profile has always been one of my favorites and Saus’ salted caramel topping is perfection. One of my biggest pet peeves is when salted caramel isn’t right. Thankfully, Saus got it 100% right.

To me, Saus is street food under a roof. But it’s damn good street food. They have late night hours on the weekend and I can’t imagine the fries and waffles don’t make for some great drunk food. I enjoyed my trip to Saus so much, I wanted to go back, but ran out of time. Add it to your list next time you’re in Boston, it’s already on mine…again.

Saus is steps away from Boston’s Quincy Market at 33 Union Street. The hours vary so visit Saus’ website for details.

Posted by poboylivinrich on October 8, 2011 in Eatin'