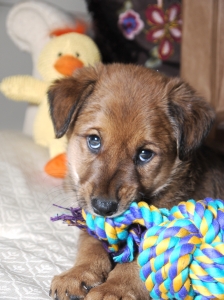 Santiago with His Rope

Well…it’s finally official, Santiago is ours. We’re joining the ranks of animal parents. He’s a border collie/labrador retriever mix aka a borador.

We picked him up on Oct. 23 from Plaquemines Animal Welfare Society (P.A.W.S.) and fostered him until it finally became official this week.

The process with P.A.W.S. could not have been easier and more pleasant. The adoption fee is only $100 and that includes a microchip and a spay/neuter. He did have a little bout with kennel cough, but the vet at P.A.W.S. gave us some antibiotics that cleared it up in a few days.

Thankfully, Santi (as we call him for short) is energetic, smart and well-behaved. Today’s his three-month birthday and he can already sit, make it through the night without going to potty and go into his crate without a command. He has a had a few accidents in the house, but nothing atypical from puppy potty training.

Santiago in His Sweater

He did come standard with puppy breath which everyone seems to be obsessed with, but I’ve smelled better things over the course of my lifetime. I do, however, enjoy all the puppy kisses and excited-to-see-us tail wagging.

Overall, it feels good to join the ranks of animal owners and I don’t think we could have gotten a better pup. So join us in welcoming Santiago and wishing him a happy three-month birthday.

And fear not, between Miguel and me, we’ll take and post tons of photos as Santiago ages. 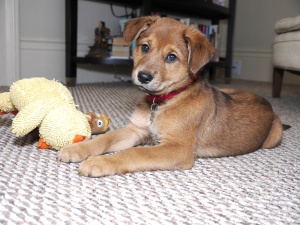 Also, for the record, Miguel wanted to name him Bruno which I had to veto. Santiago is a much better name than Bruno for a dog in my opinion. Bruno reminded me of Sasha Baron Cohen’s character.

If anyone wants to schedule a puppy playdate with Santiago, give us a couple more months and he’ll be ready to go.

Posted by poboylivinrich on November 8, 2011 in Livin'